Today more than 820 million people in the world suffer from hunger, which represents 1 in 9 people. Over the past few years the number of people affected by hunger has been increasing, eradicating all past efforts. Why does hunger still exist in 2019?

Last year in Asia, 516 million people were suffering from hunger. Today this number has slightly decreased from last year, but the number of countries impacted by hunger has increased [1]. The situation is alarming. . If nothing drastically changes by 2080, the UN believe another 600 million people will suffer from hunger. We must therefore continue our efforts of collective solidarity and support more political reforms.

Women and children under 5 years old are the most affected by hunger, especially those who live in the countryside and small farmers. A review of the global food system is essential. If we want to ensure a sustainable world for all by reaching the SDGS by 2030 as promoted by the UN, leaders must take advantage of political events such as G7 to encourage global change [2].

Hunger is mainly due to conflicts, inequalities and climate change. All three are closely related.

In 2016, around 60% of the people suffering of hunger across the world live in countries affected by conflicts. Two thirds of them live in the following 8 countries: Afghanistan, Democratic Republic of Congo, Ethiopia, Nigeria, South Sudan, Sudan, Syria and Yemen. Most of these countries are in conflict or still suffering the consequences of past conflicts. [3] 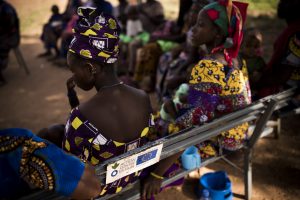 Today hunger is used as a weapon of war in many countries. Starving population, poisoning wells, burning fields, these methods are used to enslave populations. The 2417 resolution promoted by the UN which condemns the use of hunger as a weapon of war. Conflicts can arise from unequal access to resources but also but also by massive movements of populations who were themselves caused by conflicts, poverty or even climate change.

Access to the main resources necessary for survival – water, land, education, health – is unequal around the world. Even today, millions of people still do not have running water, while water-related diseases promote the development of malnutrition. WHO estimates that 50% of cases of child malnutrition are directly linked to the consumption of unsafe water and a lack of hygiene and sanitation.  In order to fight hunger sustainably and effectively, it is essential to guarantee SDG number 6: access to water for all.

Gender equality also plays a role in the fight against hunger. Women play a key role in this battle but face almost systematic discrimination in some regions of the world.

Around the world, women do not have equal access to land, tools, and financial means to empower themselves, they endure forced marriages and too often they lack access to a proper education condemning them to be trapped in the vicious circle of poverty.

If women and men had equal access to land, hunger could be reduced by 12-17%. Women are also more likely to be affected by climate change, displacement and conflict [4].

Over the past 10 years, climate disasters have affected an average of 16 million people. Storms, floods, droughts, every year these destructive disasters plunge thousands of people into precariousness. After experiencing a natural disaster, people are deprived from their lands, their income, their homes. Climatic hazards push populations to move and seek refuge in other countries, or to seek other resources, which can lead to conflicts when access is insufficient and has to be shared.

We encourage the creation of gardens, we promote agricultural practices such as agroforestry or agroecology and seed banks by training communities or providing them with the necessary materials. Without a sustainable and protected environment, all our common efforts against hunger will be compromised.

Much more than food

Agro-ecology must be at the centre of climate change debate