Six years ago, the United Nations General Assembly proclaimed June 19 of each year the International Day for the Elimination of Sexual Violence in Conflict. This day is recognized in order to raise awareness of the devastating impacts of conflict-related sexual violence and honour victims and survivors.

Along with other measures such as the adoption of the landmark UN Security Council Resolution 2467 in 2019, it represents a growing call to strengthen prevention of and response to sexual violence in conflict and bring perpetrators to justice.

Sexual violence is too often underestimated

Despite clear legal prohibitions and growing calls for action, sexual violence, along with other forms of gender-based violence (GBV), remains both highly prevalent and chronically under-reported. The risk surges in conflict and emergency settings, where the breakdown of community structures and the rule of law can exacerbate pre-existing patterns of discrimination and expose vulnerable groups to human rights violations. However, the impacts often last far beyond the act itself: the physical, psychological, social and economic consequences can reverberate throughout families and communities for generations.

Recognizing that conflict, gender inequality and gender-based violence are key drivers of hunger, Action Against Hunger provides mental health and psychosocial support to survivors and integrates gender and protection activities into our programming. These services are especially important in contexts such as Afghanistan, where a precarious security situation intersects with deeply rooted gender inequality.

"Whenever I have counseling sessions with women suffering from malnutrition or with children with malnutrition, I learn that GBV is the cause."

“Forced marriage and forced pregnancy are the most common problems of the women I work with. I have learned that these types of sexual violence make women suffer from depression and other mental health issues, making it more difficult for them to take care of themselves and their children.”

Survivors of sexual and gender-based violence may face stigma, exclusion, socioeconomic marginalization, or retaliation, which contribute to the chronic under-reporting of these types of crimes. “Most survivors feel ashamed,” says an Action Against Hunger food security and livelihoods expert in central Afghanistan, indicating that mental health support is the most pressing need for survivors. In order to reach women in a context where their movement is severely restricted, Action Against Hunger is providing mental health services in mobile health clinics and raising awareness on gender-based violence in women-friendly spaces such as breastfeeding centres. 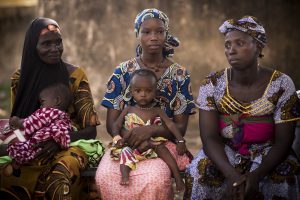 WOMEN FIGHTING HUNGER AROUND THE WORLD

Esther Bunyere with her 8-month-old daughter and Micheline Shukur, during an SMPS session in a school in Kichanga.

Conflict-related sexual violence poses a significant threat even outside of direct conflict settings.  The indirect effects of conflict-related sexual violence, such as trauma and fractured community bonds, are often present in refugee camps and other displacement contexts. This threatens the safety, security and well-being of the population and engenders a vicious cycle which may increase the likelihood of sexual and gender-based violence occurring within the camp or displacement setting. To help break this cycle and respond to the needs of displaced populations, Action Against Hunger provides Mental Health and Care Practice as a core area of intervention in countries such as Bangladesh, where hundreds of thousands of Rohingya have taken refuge after fleeing from neighbouring Myanmar. Here, our teams provide individual and group counselling to help survivors of sexual and gender-based violence overcome trauma.

Our teams in Bangladesh also conduct awareness-raising activities in order to address harmful social norms, with the goal of preventing sexual and gender-based violence from occurring. ““We find many cases of domestic violence,” says Sahila Sadaf, an Action Against Hunger psychologist who works in the refugee camps. “Most refugees are unemployed. They are frustrated. They have low levels of self-esteem. There is also the underlying prejudice that men are superior. These conditions can lead to increased aggression and sexual violence, but women sometimes think that husbands have the right to beat them.” She adds that effective behavioral change requires men’s participation: “Awareness-raising sessions are quite effective. But if we only give messages to the women of the family, it will not be effective. Sessions should involve male participants. If they get proper education, they can change their views.”

"Most of the current funding is for women and children. But the problem can’t be solved if you don’t include men in awareness-raising activities. This is a very big issue."

Thomas Nobre, Deputy Country Director of Action Against Hunger Afghanistan, agrees. “Most of the current funding is for women and children,” he says. (The majority of Action Against Hunger interventions in the country target pregnant and lactating women, and children under five years of age).  “But the problem can’t be solved if you don’t include men in awareness-raising activities. This is a very big issue.” Nobre  notes that changing mentalities cannot be done in one or two sessions, but only over the long term. Accordingly, community dialogues were integrated into the recently concluded Improved Nutrition in Afghanistan project, funded by Global Affairs Canada and implemented by Action Against Hunger, in order to engage women and men, boys and girls in discussion on gender topics and promote positive behaviour change. 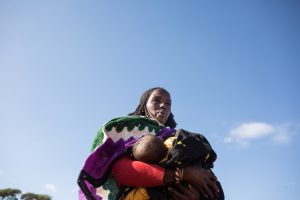 FIGHTING FOR EQUAL RIGHTS AND AGAINST HUNGER ?

Our teams also highlight that financial empowerment and better educational opportunities would be an effective way to help survivors and reduce sexual violence. “Financial dependency can make survivors accept sexual violence,” remarked a team member in Afghanistan, citing child marriage and Bacha Bazi, a practice involving the sexual abuse of boys by men in positions of power, as examples of how financial hardship can lead to exploitative relationships. She adds that providing “…educational opportunities to girls could help them stand on their feet in the future.”

Action Against Hunger continues to expand our Mental Health, Psychosocial Support and Protection activities in order to address the needs of survivors of sexual and gender-based violence, as well as advocating for improved economic and educational opportunities for women and girls. We are also a proud member of the Call to Action on Protection from Gender Based Violence in Emergencies, a multi-stakeholder initiative launched in 2013 designed to ensure that humanitarian interventions include the systems and mechanisms to mitigate gender-based violence risks, especially violence against women and girls, and to provide safe and comprehensive services to those affected by gender-based violence.

The Improved Nutrition in Afghanistan project was undertaken with the financial support of the Government of Canada provided through Global Affairs Canada (GAC).

What is the current situation in Ukraine?

Change Makers in the Making: It Starts with Her Maiden Bold Step