By the year 2050 there will be 143 million climate displaced people. The analysis of the World Bank’s 2018 report is irrevocable, it puts the spotlight on an alarming situation that has been denounced for several decades by several NGOs and by scientists for nearly 40 years.

The term “climate emergency” is defined as “a situation in which emergency action is necessary to reduce or stop climate change and prevent the environmental damage which are potentially irreversible”. By declaring it expression of the year, Oxford dictionaries highlights the awareness of populations and the need for immediate action. The European Parliament has just symbolically declared a state of climate emergency last Thursday, in view of the Cop25 to be held from December 2nd  to 15th. 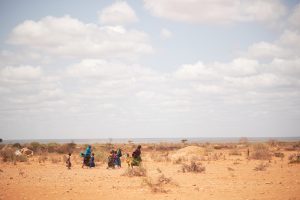 The direct consequences of hunger are indisputable: desertification, flooding of crops, shortages of food stocks… Others appear gradually, such as forced displacements. Migrations due to environment have always existed, nomadic or sedentary populations move if climate is too extreme out of an instinct for survival. However, drastic climate changes, temperatures and the exacerbation of climatic changes are forcing more and more people to leave their homes.

These climate changes and natural disasters have consequences on the most vulnerable populations. For the most part, the developing countries are the first to pay the price for the mistakes made by the industrialized countries. While the intrinsic link between climate and hunger seems indisputable, the consequences on food insecurity, water management and the proliferation of diseases are less clear.

How does climate change affect hunger?

According to Global Footprint Network, if the whole planet lived like French people, it would take 2.7 planets to meet the needs of the world’s population.

Food insecurity is when a person is unable to eat properly on a daily basis to maintain a healthy diet.

"26% of the world’s population suffered moderate or acute food insecurity in 2018."

The link with climate is undeniable: melting of the ice caps, extinction of 60% of animal species, destruction of ecosystems, fauna and flora, proliferation of forest fires like the one ravaging the Amazon. Each climate disruption has a consequence on hunger: it either destroys crops and food stocks, forces water shortages or provokes land desertification and loss of biodiversity. Climate change plays a direct role on the ability of populations to feed themselves.

In Ethiopia more than 70% of the population earn a living from agriculture and farming, and the country’s economy is partly based on these activities. This year, the country’s farmers faced the second worst drought in 3 years. Garbicha lives from agriculture, but due to the lack of water he can no longer feed his livestock: “this situation is very difficult, even though we still have pastures without water our livestock will die. And if they die… what will we do to survive? ” he says.

Farmers and small producers in developing countries are the first to suffer the consequences of climate change. As drought periods become longer, welding periods are getting longer. These periods represent the grain reserve between the last harvest and the next. In many Sahelian countries, the planned food stocks are now no longer sufficient for the needs of the population. Soil salinization due to raising water levels that seep into the land ruin crops and reduce agricultural areas. The lack of rainfall in the Sahel and the Horn of Africa region endangers the population. An estimated 2.2 million people in Somalia could face a crisis or emergency levels of acute food insecurity by July.

Yet family farming accounts for 80% of world food production. Beyond the loss of their only means of subsistence, farmers are also losing their ability to feed the rest of the world.

When the situation becomes unbearable, the population is forced to leave their home and look for alternatives. Natural disasters ravage the poorest countries and those least prepared for such emergencies. After each disaster the population is impoverished and has to rebuild everything.

The International Organization for Migration defines climate-displaced persons as “persons or groups of persons who, mainly for reasons related to sudden or progressive environmental change adversely affecting their lives or living conditions, are forced to leave their homes or leave on their own initiative, temporarily or permanently, and who as a result move within or out of their country“.

According to the Internal Displacement Monitoring Centre, in 2018 17.2 million new displacements due to natural disasters occurred, compared to 10 million caused by conflict. Political crises such as the Syrian conflict that has been going on for 8 years now, chronic crises in countries such as the Central African Republic or Southern Sudan generate migratory movements, displacements of populations to other countries looking for a refuge. However, internal displacements of the population remain the most frequent and numerous and are on the rise in the face of accelerating climate change. Last year, 61% of internal displacementsnatural disasters.

Ethiopia had already faced one of the worst famines of this century in 1983, which left 2.5 million people internally displaced. In 2016, a severe drought hit the country. The worst in 50 years, with nearly 10 million Ethiopians in need of emergency food aid. This year, Cyclone Idai struck Mozambique and Zimbabwe, following the disaster a cholera epidemic spread, with 4,000 cases recorded. Following floods, the main risk is the proliferation of water-borne diseases such as cholera. The lack of access to drinking water forces people to drink unclean water.  More than half of all climate displacements are caused by floods. After the disaster in Mozambique, we counted more than 161,000 internally displaced people.

Natural disasters are the main cause for the majority of movements of populations which move in general inside their own country, settling in another region for example. That is when tensions can arise whether they are ethnic-based or linked to a lack of resources, often leading to more conflicts.

Hunger is part of a long-term dynamic that is largely fuelled by climate change. An additional 600 million people will suffer from hunger between now and 2080 as a result of climate change. Climate change and nutritional security are therefore closely linked and could increase child stunting by 62% in 2050 and raise the number of undernourished children by 25.2 million.

In our countries of intervention, we carry out various actions to promote practices that respect the land and the environment. Agroecology is a comprehensive response to the challenges of food security, nutrition and climate change. It contributes to the implementation of the right to food, providing new foundations for a sustainable food system, resilient agriculture and good nutrition. The democratization of practices such as agroecology or agroforestry, among the best known, is necessary and even indispensable. In countries such as Chad or Guatemala, the return to ancestral farming practices helps to protect the soil and the environment.

In Ethiopia, in the Gambella region we created gardens for the refugees to grow their own food. Many of them had to abandon their land and were left without means of subsistence. For others, it was an opportunity to learn a new trade and to be able to feed their families.

In Guatemala, in the dry corridor region, it is very difficult to cultivate the land, so we trained communities in agroforestry and teach them how to better conserve the soil and to be able to cultivate land that many previously considered barren. Rural communities were able to expand and diversify their plantations. In the Chiquimula region, we created seed banks to diversify family diets and to stabilize seed prices. Thanks to the accumulation and distribution of these seeds, the cost of these products is avoided during months of shortage.

In 2018 we have supported more than 2.7 million people through our food security and livelihood programs.

In order to fight climate change, it is necessary to have a political commitment and to take measures in line with the current situation. Population displacements will continue to multiply, both internally and in other countries, and if nothing is done, they will only increase. Rich countries have a duty of solidarity towards the poorest populations in order to respect and achieve the Sustainable Development Goals by 2030. France must give concrete guarantees of an ambitious ecological transition policy that frees itself from the energies of the past: nuclear power and fossil fuels (oil, gas, coal).