Not in my wildest dreams did I imagine exporting our handicrafts to the West Bank’, Wafaa says while proudly showing me the pillowcases and bed linen she designed and sewed together with her older sister, Haana.

Initially two individual applicants to Action Against Hunger’s income generating program, the two sisters now work together in a room at the elder sister’s house, which saves them the cost of renting. It was the eldest sister who first saw Action Against Hunger’s project announcement at the local women’s association. She now supports her siblings with the general management of their joint business. 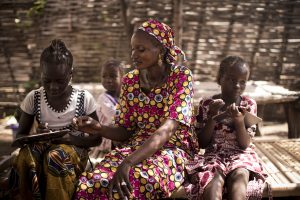 WOMEN FIGHTING HUNGER AROUND THE WORLD

Wafaa and Hanaa both dream of transforming their joint business into a small factory. The restrictions on movement of goods and people between the Gaza Strip and the West Bank, however, do not allow them to run a normal business. ‘We can only leave Gaza under very restrictive conditions’, Wafaa explains. ‘We have not been able so far to deliver the big orders we started receiving from the West Bank through our Facebook page.’

Both sisters have come a long way to arrive at this point. 35-year-old Hanaa, mother of six, and currently the sole breadwinner, saw her life change when her husband could no longer work in Israel during the second Intifada in 2001. Throughout the three wars in Gaza, Hanaa and her children lived on the income of the husband’s temporary jobs and support from the family-in-law. ‘My elder sister convinced me to take sewing courses at a local women program’, Hanaa explains. ‘At that time, I didn’t realize I was paving the way for my future business.’

The 2014 hostilities also impacted Hanaa’s younger sister, 25-year-old Wafaa. The home-based sewing workroom that she had established to cover the cost of her university studies, was completely destroyed. Through Action Against Hunger’s project, both sisters realized that their businesses would be stronger if they would work together. ‘The training showed us how to operate a business; we even learned about advertising through Facebook!’, Wafaa smiles.

Hanaa praises herself lucky for having a supportive family. ‘During the Action Against Hunger training, I met women who suffer from domestic violence. I dream of managing a little factory operated by women who come from such vulnerable backgrounds’. Wafaa nods and adds ‘Every woman dreams of marriage and motherhood, but right now my work comes first’.

Risk of collapse of basic services