These men and women, identified as humanitarian workers, were murdered in their offices while working to help the victims of the tsunami. Since then, justice has still not been served. Action Against Hunger continues to call for justice and the prosecution of those responsible for this massacre.

Rarely humanitarian workers have been targeted so violently. This attack on our colleagues constitutes a war crime. Indeed, according to Geneva Conventions, the protection of civilians and members of humanitarian organizations, remains an inviolable rule during war.

Surprised in their offices, the seventeen employees of Action contre la Faim were assassinated while trying to help the population. After having supported more than 100 000 people in Sri Lanka since 2005, we finally decided to leave the country two years after the massacre. In addition to the victims, their relatives and colleagues, a whole population was left behind.

For 15 years, none of the successive Sri Lankan governments has acted in favor of the victims and their families even if the gravity of this crime has been recognized by the highest international authorities. The involvement of the Sri Lankan authorities, their efforts to block any real investigation, and the passing years make the pursuit of justice for our colleagues even more difficult and complex.

Despite this impunity, we succeeded in obtaining in 2014 the opening of an international investigation, which resulted in a report on the crimes conducted during the Sri Lankan civil war. The United Nations Human Rights Council corroborated our findings that the Sri Lankan security forces were involved in the attack and that the families and witnesses were under threat.

"Sri Lanka remains in a state of denial about the past, with truth-seeking efforts aborted and the highest State officials refusing to make any acknowledgement of past crimes."

Action Against Hunger is not giving up on getting justice for the 17 victims of the Muttur massacre and we continue to call on all relevant authorities to use their influence to ensure that justice will be served for the victims and their families.

The Muttur massacre is unfortunately not an isolated event and since the beginning of the year nearly 200 aid workers around the world have been killed, injured or kidnapped while helping the most vulnerable. Attacks on aid workers are attacks on aid and all those who need it. These tragedies remind us that the international community must mobilize to ensure that indifference and disregard for international law do not prevail. The safety of humanitarian workers, as well as that of the populations they assist, is non-negotiable! 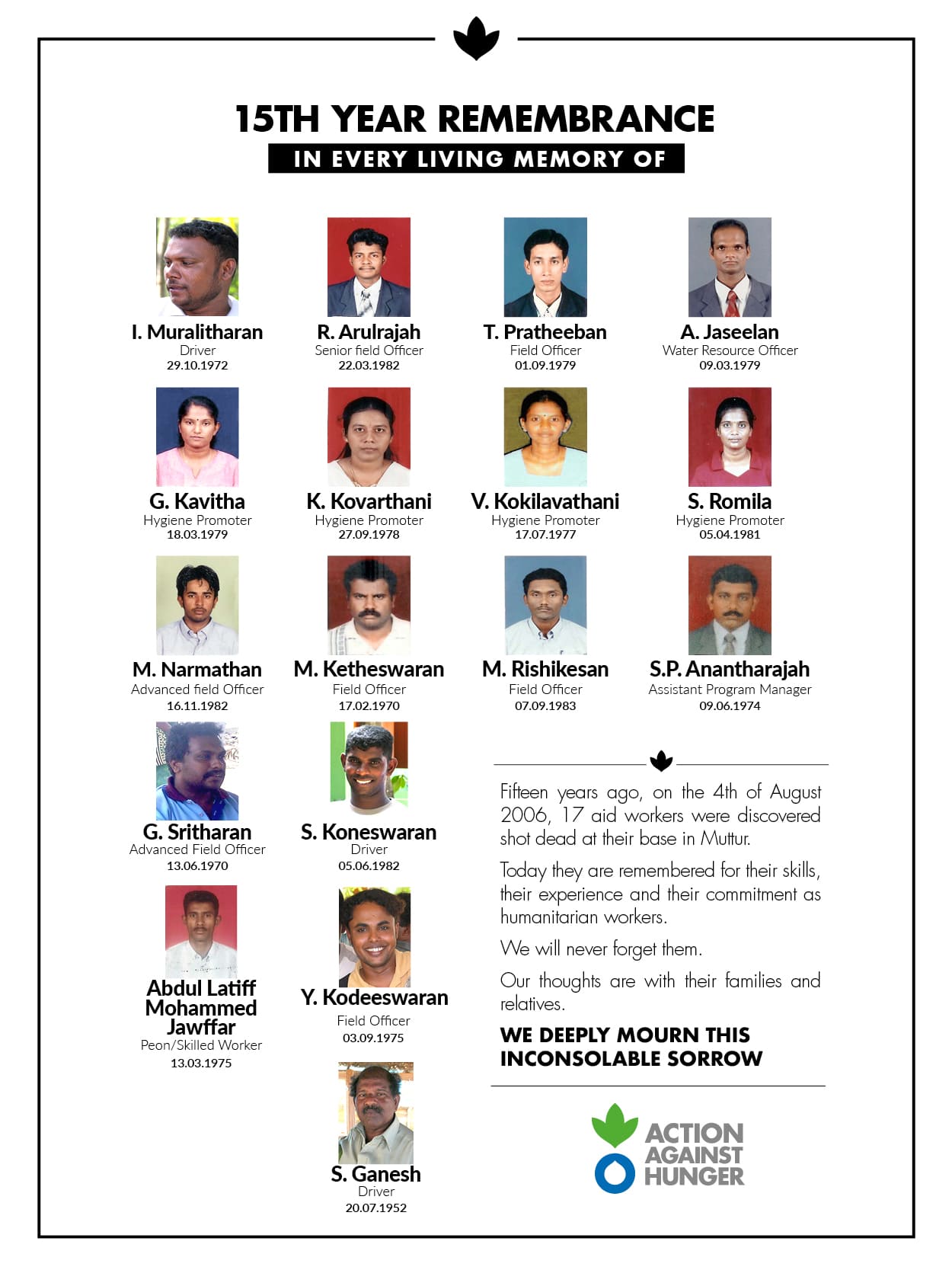