Using relactation to save an abandoned baby

Shetara successfully breastfed her adopted baby, even though it had been 7 years since her last pregnancy. Our relactation program shows women how to breastfeed even when they have never been pregnant or if they have not been for months or years.

To fight against child malnutrition, we recommend exclusive breastfeeding from 0 to 6 months. However, in remote areas, prone to conflict or climatic disasters, breastfeeding takes on a completely different importance and becomes vital for children.

The importance of breastfeeding

Breast milk contains all the nutrients necessary for a child’s development: it is sterile, always at the right temperature and evolves as it adapts to the baby’s needs. Breastfeeding is the safest way to ensure the health of infants, unlike infant milks. Using this type of baby product can be very complicated and even dangerous for the baby if not done in the best conditions. These infant products require access to drinking water, the means to be able to prepare milk according to hygienic measures and keep it cool. Many conditions that are often difficult to meet in conflict areas, underdeveloped or after natural disasters. 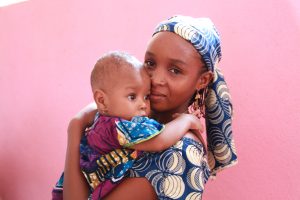 Let Them Choose : Action against hunger joins forces for the breastfeeding week

Last year for the breastfeeding week that takes place each year from August 1st to August 7th   we launched a petition called “Let Them Choose”. This petition aimed to stop aggressive marketing practices to sell infant milks to uninformed or ill-informed parents to pressure them into buying these products. In many countries, these marketing practices can have a direct impact on the baby’s health.

After having obtained 72,696 signatures at the European level and more than 11,000 signatures in France alone, our fight against brands that do not comply with the WHO code for the marketing of infant milks continues!

We raise awareness among parents on the importance of breastfeeding and good practices as well as prevent the risks of misuse of infant formula on the health of the child.

Practicing breastfeeding could save the lives of more than 800,000 children under the age of 5 worldwide every year.* As a result of increased conflict and displacement, many children are orphaned or no longer have access to breastfeeding.

"I could not imagine that 7 years after my last pregnancy I could breastfeed again even without being pregnant."

Relactating is the act of restarting breastfeeding without having been pregnant for several months or even several years after pregnancy. Women who have stopped breastfeeding recently or in the past can produce milk again for one of their children or even in the event of adoption. This is the case of Setara, a Rohingya mother of an adopted baby. “My mother found the baby in the nearby forest. She took the baby and welcomed him into our family. The next day, I took him to the nearest Action Against Hunger hospital.”

Our relactation program administrates a light hormone treatment. Then, we make sure both the baby and the mother are breastfeeding

I was admitted to the hospital and 4 days later I relactated and started producing milk again.

We administer breast milk through a tube positioned next to the mother’s nipple. The child will instinctively suckle the nipple and receive milk, this action will stimulate the mother’s nervous system and involve the brain in the production of hormones (prolactin and oxytocin) that contribute to the lactation process and trigger the rise of milk.

“It took me 4 days to produce the first drops of milk and after 22 days I could breastfeed the baby completely. I was happy to be able to breastfeed again. I fed the baby like that, I couldn’t give him food alone, breastfeeding allowed him to gain weight. “

This program has been a success in Bangladesh where it was launched since 2017. In our health centers, 132 adoptive and biological mothers were able to breastfeed their children again between 2018 and June 2019.

Action against hunger join forces for the breastfeeding week