Drought leads to a humanitarian crisis

The effects of climate imbalance are ravaging the southern districts of Madagascar. The frequency and intensity of droughts have risen sharply in the last few years, with a devastating impact on populations’ health and livelihoods.

The lack of water – in particular, drinking water – is already chronic in the Grand Sud region, but little rainfall and the drying-up of the phreatic zone is further aggravating this shortage. The number of waterborne diseases, such as diarrhoea, is therefore soaring, especially among young children. This puts them at risk of becoming severely malnourished.

An almost total lack of rain in 2020 also wiped out agricultural production, thus bringing the hunger gap forward and making it more severe than in previous years. Loss of crops and very low food stocks combined with the pernicious impacts of the health crisis (pressure on food prices and limitations on income) have constituted another blow to households’ food security. 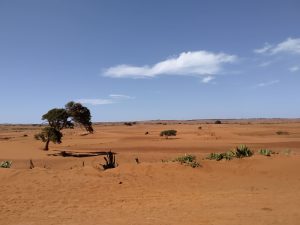 ‘The little I managed to produce in the past has been consumed entirely. I don’t know the dates, but I haven’t had a harvest in a long time. Since there’s been no rain, the kids can’t eat properly. I give them what I can find, like cactus leaves. With this diet, they get diarrhoea and nausea, but we have no choice. At least it doesn’t kill them’. This is the story of Maliha, 38, who is a separated mother of eight children in Ampanihy.

The south on the brink of famine

The kéré – which means famine in Malagasy – comes back to the south every year during the hunger gap, but the food crisis has reached new heights of severity this year.

The situation has worsened because of persistent drought, sandstorms and constant hikes in food prices. The region is suffering from poor harvests for the second year in a row. There will therefore be no significant improvement to food security this summer, as is usually the case in this period. Households are coming to the end of what was left of their food stocks.

The hunger gap period, which generally begins in October, will start earlier in 2021, causing even more damage to families’ food security.  Currently, an estimated 1.14 million people in the Grand Sud region are currently in a situation of serious acute food insecurity, and nearly 14,000 people in a famine situation. Among children under five, 135,476 suffer from acute malnutrition, including 27,134 from severe acute malnutrition.

“The hunger gap comes around every year, but it’s particularly tough at the moment: it covers the whole year. Before, the rain fell in January, February and March, and different varieties of melons and pumpkins could be grown. This year, the rain still hasn’t come, and the population is suffering”, says Jean Delacroix Tsimanantsiny, the deputy manager of Action contre la Faim’s programme in Ambovombe.

"This year, the rain still hasn’t come, and the population is suffering."

Currently, the district of Amboasary-Atsimo is the worst hit, followed by Ambovombe, Ampanihy, Beloha and Tsihombe. Some households have almost exhausted all possible adaptation strategies to access food and income. The result is an extremely inadequate diet, in terms of both quantity and quality.

In early 2020, Action contre la Faim implemented mobile healthcare and nutrition teams in the districts of Grand Sud. Currently, twenty-five mobile teams travel around the nine districts to serve communities located far away from medical centres, especially in areas where the most acutely malnourished children are detected (severe and moderate).

To support the nearest Health Centre, a mobile team tests all children aged under five in the fokontany (villages) identified as vulnerable. This team, generally made up of two nurses and another professional who carries out screenings, offers treatment for malnutrition and certain childhood diseases.

“The situation has got much worse. Before, there were around 80 patients in the Health Centres in this area, and now there are almost 400. That’s why we must come in and help out. The figures are rising, in CSBs and in villages”, explains Hamelo Lahimalio, a nurse from a mobile team in Toliara.

By working directly in the region’s villages, our teams stay as close as possible to communities and prevent them from needing to go to a medical centre, which is often far from their home and overcrowded. At each site, we start by explaining the different treatment stages. We then screen new arrivals and sort children into different groups: good health, moderate acute malnutrition, and severe acute malnutrition. Next, the healthcare professional measures the children’s arm circumference, height and weight, and records this information on check sheets. One nurse takes care of malnutrition cases and another deals with childhood diseases.

The children are then treated and their mothers are given information on the causes of child malnutrition. We show them how to use the Ready-To-Use Therapeutic Food (RUTF) and carry out an appetite test. Afterwards, the children are given a medical check-up and rations are distributed.

OUR INTERVENTION IN MADAGASCAR

“We can’t feed our children. That’s what makes us suffer the most. There’s no rain, so there’s no harvest. The land can no longer grow crops, so it’s been abandoned. We eat plants. Anything we can gather. This treatment really helps us. My child is healthy again, having followed the treatment.” reports Donoe, 40, a separated mother of six in Ampanihy.

"I remember a child who was just skin and bones, It seemed hopeless."

“I remember a child who was just skin and bones. It was hard to imagine him getting better. It seemed hopeless, but we’ve never given up. We told his mother to follow the instructions carefully, and thankfully, he recovered’’ recalls Florentine Ramanampisoa, a nurse in a mobile team in Ampanihy.

The current crisis is likely to drag on through the coming months and requires a lot of vigilance. The nutritional situation is already alarming, and our teams plan to maintain their efforts in assisting the populations of Grand Sud. Even if the rain comes back at the end of the year, the losses for farmers are already too great. Recovery action needs to be taken to support their activities and mitigate this catastrophe.

witnesses to the climate crisis