For the past 9 years, Syrian refugees have been living in Jordan after fleeing the Syrian civil war. Some of these refugees settled in Azraq Camp, which is now home to 35,752 Syrian refugees.

One of these refugees, Fareejah, works as a plumber in the camp through Action Against Hunger’s Water, Sanitation, and Hygiene (WaSH) programming, which is completed in partnership with UNICEF. She moved from country to country before settling in the camp in Jordan with her husband, three sons, and daughter in 2015 after Syria was struck by war.

“I say thank you to God for helping us find safety here in Jordan,” says Fareejah with hope in her eyes. She is one of the 24 refugees (12 men and 12 women) who were chosen to take part in a plumbing training workshop, which later led to working opportunities in villages around the camp. The plumbing training was orchestrated by Action Against Hunger as part of their “Increasing community and ownership and sustainability of WaSH services in Azraq Camp, Zarqa Governorate” which is implemented in partnership with UNICEF.

During her first days in the camp, Fareejah found that it was a bit difficult to cope, as she could not find any means of supporting her family. However, after four years of living in the camp, she finally received an opportunity to work as an incentive-based volunteer.

"She asked me if I would take such a job, I said yes I will!"

When Fareejah lived in Syria, she often completed household plumbing and maintenance tasks herself while her husband was working abroad, all while raising her infant children. This prior experience made her an excellent candidate for the plumbing training offered by Action Against Hunger and UNICEF. 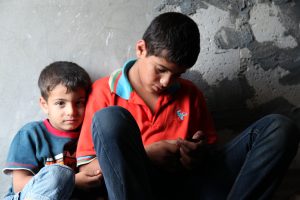 Hunger for a cleaner environment in Irbid

Knowing the stereotypical and cultural views and comments she might receive only made her more determined to proceed with the opportunity.

Action Against Hunger has dedicated its work at the camp to helping nearly 40,000 refugees since 2015 through the camp-wide WaSH projects. In 2019, activities focused on operation and maintenance of WaSH facilities, hygiene promotion and community mobilization, and hygiene item distributions. This project trains female and male plumbers to conduct minor maintenance on the communal WaSH blocks (latrines) installed and maintained throughout the camp by Action Against Hunger, in partnership with UNICEF.

The society in the camp is a society of its own that follows the views and cultural norms in the Middle East. As plumbing is known as a stereotypically male field, Fareejah felt the impact of these gender division right away. “Anywhere we go people would be surprised, or they would laugh and ask ‘oh, you are a woman and you are a plumber?’” she said. This only fueled her motivation to challenge these stereotypical views. “This added more fire to my determination to work more in maintenance as a women plumber as part of this project,” she said with pleasure.

It is important to recognize the challenges that cultural and social gender norms play in preventing women from gaining the same skills as men, even though men and women should be treated equally. “Women are half the society. Why should we not complete the society, do the job and work?” she said.

Through her experience working with Action Against Hunger’s WaSH team, she obtained many important skills, such as how to maintain the WaSH blocks and install a French toilet. All skills she learned will benefit her, not only now, but in the future as well, wherever life takes her. “We will have gained knowledge and experience and when we return, we can create new lives for ourselves,” she said. “Everything we have learned from this project we have benefited from.”

Fareejah believes that all women living in the camp should not hesitate to go out into the world and find jobs, if they want to. “I would advise every woman to work in any job opportunity she gets,” she said. She hopes that more women would become brave enough to break such cultural boundaries and show that they are as strong as the men living in Azraq Camp.