Hunger for Accessibility at Azraq Camp

Many Syrians who fled to Jordan live in host communities, while approximately 35,767 Syrian refugees reside in Azraq camp, as stated in the latest statistics from UNHCR.

Life at Azraq Camp with a Disability

“We lived a different life here!” exclaims Wael when asked about his family’s life in the camp. Since 2014, they lived a relatively normal life, but faced some obstacles along the way, especially when it came to Maher’s well-being. Wael began to notice that Maher was limping. “I took him to the doctor and he diagnosed him,” said Wael sadly.

"We found out he has broken bones in both of his legs."

Wael began to notice that Maher was facing some challenges with his legs, especially when using the public latrines. “My legs would hurt when I had to squat to use the Arabic toilets,” said Maher shyly, when asked about the challenges he faced during his daily routine in the public latrines. Arabic or squatting latrines are toilets used while squatting, rather than sitting most commonly used in Middle Eastern and North African countries. These are the main types of toilet installed in the communal latrines in the camp. “He used to complain that his legs would hurt because the distance to the bathroom was far,” said Wael. 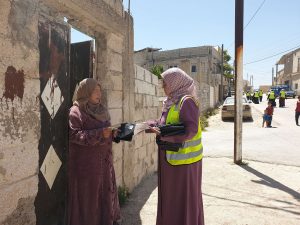 HUNGER FOR A CLEANER ENVIRONMENT IN IRBID

Life at Azraq Camp with a Private Latrine

In January 2020, Action Against Hunger began building private latrines for refugees with disabilities in the camp as part of the Water, Sanitation and Hygiene’s (WaSH) “Safe and Equitable Access to Private Latrine Services for Men, Women, Boys and Girls with Disabilities in Azraq Camp”, funded by the Jordan Humanitarian Fund (JHF) through the United Nations Office for the Coordination of Humanitarian Affairs (UNOCHA). Action Against Hunger is set to build around 542 private latrines in two of the camp’s villages. Most communal latrines are Arabic seated latrines, while the private latrines installed were equipped with English seats for refugees with physical impairments and disabilities, such as the one built for Maher and family. The latrines are attached to the back of the families’ caravan for their private use.

Example of English seats which are installed in some or most of the private latrines which Action Against Hunger are building for Syrian refugees with disabilities. Photo by: Amer Al Ghanem (WaSH Programme Manager – Azraq Camp

After installing the private latrine, Wael began to witness the pain decrease during Maher’s visits to the bathroom. “It really helped Maher,” said Wael beaming with joy. His distance reduced as he did not have to venture out to the bathrooms and the pain subsided now that he started using the English seat in the private latrine. “Thank God he stopped complaining of any kind of pain,” said Wael. “Honestly, the project was a huge success as it gave him much comfort in comparison to the Arabic seat.”