Breaking the long cultural cycle of women not speaking strongly in the public, Yahauwa, a mother of four and member of Ngalomari community in Gubio Local Government Area of Borno state, Northeast Nigeria championed the move to end open defecation in her community as a volunteer.

Members of Ngalomari, a small community of about 90 households practiced open defecation for as long as they could remember and never saw anything thing wrong with it. Open defecation was commonplace due to lack of toilets and sanitation knowledge. Speaking on what inspired the practice, Yahauwa observed; “for us, poop became organic fertilizer or feed for animals. We never considered latrines important in our households, but now, it is a key requirement that a man must have before our daughters accept a marriage proposal,’’ she said in excitement and proud to have been part of the team that worked hard to achieve Open Defecation Free status in her community. 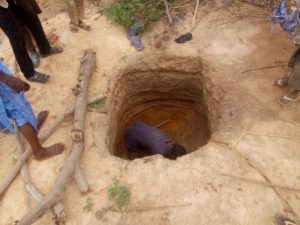 Prior to the intervention, open defecation practice in the community worsened due to the security situation which prevented them, especially women and girls, from defecating in the bushes at night.  With no access and knowledge of the risk open defecation posed on their health, they resorted to defecating close to their homes.

The team, which includes Yahauwa, was tasked with the responsibility of facilitating hygiene and sanitation sessions in their community. “During the training, I realized that open defecation is a way to eat my poop and that of others leading to serious diseases. Therefore, I took it upon myself to build one latrine for my family within one month. I called for emergency meeting and urged adults and youths in my village to build latrines for all households and requested able-bodied men to help the weaker ones in digging the soak away pit for the latrine. Together with Action Against Hunger, I conducted house-to-house visit to promote hygiene messages”.

In May 2019, all households in Ngalomari had latrines and equally made use of them as they were certified open defecation free (ODF) by the Borno State Task Group on Sanitation.

Proud of their new status and the hygienic state of the entire village, the community leader therefore issued a decree which made owning a latrine a criterion for acceptance of marriage proposal in the community.

According to the head of the village, “Latrine is now a must have before we give our daughters out in marriage. See for yourself how our village looks today. We are proud when a stranger comes into our community”.

Members of Ngalomari community revel in their Open Defecation Free status, especially women and girls who now feel safer as they do not have to go out in the dark anymore in search of secluded and private places to defecate.

Hunger threatens more than a million children in northeast