Rebuilding one life in a camp

From the car, the countryside sweeps past. Golden-brown hills preceding the mountain range that you can make out in the distance, simmering in the haze of the heat. Vast plains stretch out along the road. We are in Iraqi Kurdistan, a region in the north of Iraq.

On the sides of the road, the concrete and metal of structures of large, unfinished building complexes can be seen. Since 2014 and the conflict against ISIS, the country is facing an economic and financial crisis. Nobody knows if the building work will resume one day. Poverty, vulnerability and unemployment – the conflict has affected the communities here, both local and the displaced, and even refugees from the neighbouring country of Syria.

Setting off from the town of Dohuk, we drove for around forty minutes when Alhan, our Kurdish colleague who is responsible for the psychosocial support, points out a stretch of white in the distance. It is Chamisku, one of the many camps for displaced Iraqis. Chasmisku camp hosts nearly 30,000 people fleeing from the armed group. 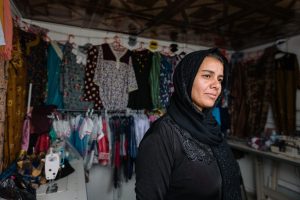 Saadya, fighting for her dignity

On approval of the Camp Manager, we entered the site, demarcated by barbed wire. All around us were round tarpaulin tents lined up in innumerable rows that criss-cross and make up the arrangement of the camp. It is nearly 40°C, a dry heat difficult to endure. The colours are as if they have been faded by the sun, everything is covered in ochre-coloured dust, against the white tents and washed-out sky.

Alhan tells us that is it one of the camps where the living conditions are the most acceptable: the buildings are maintained, the tarpaulins of the tents are replaced every year and the families have private sanitation facilities.

In the alleyway, a fruit and vegetable stall stands beside a tent housing a pool table. A few steps away, a barbershop and a beauty salon face each other. Chamisku was set up four years ago; while coping with the harsh conditions, people recreated similar settings to their previous village life, in order to establish as much normalcy as possible. Every day, through their amazing resilience, the inhabitants rebuild their lives despite the harsh reality of being far from home, exiled by the conflict, and affected by trauma.

Some of the people who live here come from the region of Sinjar, to the west of Mosul. The most common religion there is Yazidism, which further exposed them to being persecuted by ISIS. In 2014, in order to survive, the families had to flee in a rush, leaving everything behind. Many chose a mountainous route, north of Sinjar, behind which is Syria. Even though it was an impossible destination, because of the conflict, it was the only way to reach the refuge ofKurdistan. Between the mountain and Kurdistan, one week’s worth of walking still separated the displaced from the horrors inflicted by the armed group.

Many people who told us their stories remain scarred. Ameera has been living here for 4 years, she is in her twenties and she recalls: ͞ “I was pregnant when I fled to the mountains. I have seen children die of hunger and thirst. I lost contact with my husband while fleeing, because I was not with him when leaving. Fortunately, we found each other afterwards but I lost everything that day. We were happy before, we had a farm and a house.͟” Today Ameera has opened her own beauty salon in the camp. Her husband, who is sick, cannot help her to support the needs of the family. They still do not know if they will be able to return home one day, or in what conditions.

Today the conflict has finished, officially as of December 2017; there are still close to 2 million people displaced from their homes. 3.9 million have been able to return home, but the conditions they are returning to are often poor: destroyed water networks, devastated fields, lack of health services in both rural and urban areas. Only 30% of the remaining displaced consider being able to return home by the end of 2018. Those who return often do not have enough resources or savings to start their lives again. Having left everything behind, they find nothing but destruction and few prospects for the future.

Think of the future: learn a trade and overcome the trauma

Some have decided to wait a little longer in the camps that were created to accommodate them or in makeshift, rented accommodation on the outskirts of towns, that often costs far too much.

However, in a post-crisis context, with a competitive employment market strongly in decline, finding a job or a source of income is a challenge. To respond to this situation, Action Against Hunger, with the support of RDPP, have developed a twofold employment creation programme, enabling the more vulnerable to start earning again, whilst providing psychological counselling, helping them overcome their traumas and restoring their self-confidence.

Ameera was one of the 150 people from the displaced populations, local communities and Syrian refugees who have been supported to create their own enterprise or become apprentices in local trades. She chose beauty treatments because she worked in this sector before her displacement, just like Yasir, a pastry chef and Syrian refugee who left his country with his wife in 2011. For six years he has worked as a day labourer on small construction sites. ͞“I was a pastry cheffor 11 years in Syria, I can go back to my trade again, it is like a dream come true͟” he explains.

Others, like Rundik – 24 years old, from Iraqi Kurdistan – had no previous work experience. Disabled by a misshapen hip, she had to leave school to work to pay for her medical treatment. She is now an apprentice in a confectionary factory with her brother who has also benefitted from the programme. Between the two of them, they provide for their parents and their relatives. Rundik hopes to be operated on soon.

Apart from the technical training, support and psychological counselling has also been provided. As Andrea Bigio, the Project Manager overseeing this program, explains, ͞“When you carry out this type of project, you need to consider the different needs of the people. It is not only about technical needs such as money to start a business, but also about theirpsychological and emotional needs. We all need special support after a crisis to be able to face the difficulties and be able to begin our lives again.”

To him, the project helps not only individuals, but society to move forward,

When faced with a future where returning home is uncertain for displaced Iraqis and Syrian refugees, building relationships based on trust is essential to preventing tensions and contributing to living together peacefully. ͞To be able to start to live again, being an active member of a community is very important to them and their place in the community. We have noticed a huge improvement in their self-confidence.”

This project is supported by the European Regional Development and Protection Programme (RDPP).

In Iraq, the agroecology helps Qassim to work on his own land