On January 12, 2010, a 7.0 magnitude earthquake struck near Port-au-Prince, Haiti, killing an estimated 220,000 people, injuring 300,000 and displacing 1.5 million people from their homes. The quake destroyed infrastructure, caused a deep economic recession, and led to the country’s first cholera outbreak, which grew into an epidemic.

“Haiti was the poorest country in the northern hemisphere before the earthquake hit, and its people already faced glaring unmet needs,” says Cédric Piriou, Action Against Hunger’s Country Director in Haiti. “This catastrophe exposed long-standing weaknesses in the country’s governance, infrastructure, and basic systems.”

Within hours of the earthquake, Action Against Hunger, which has worked in Haiti since 1985, mobilized our emergency teams to save lives and meet urgent humanitarian needs. In the first days and weeks of our response, we provided emergency food and water and installed latrines, hand-washing stations, and water treatment points. We established specialized health and nutrition centers to help mothers and young children. We also launched cash-for-work programs, allowing people to earn an income.

Fedia, a young woman, was among the millions who lost their homes: her parents’ house collapsed during the quake, forcing her family of seven to sleep first in the streets and then in the ruins of their house. As they struggled to survive, the family faced another crisis: Fedia’s sister died while giving birth to her son, Deverly, and Fedia lacked sufficient resources to care for her newborn nephew.

At the time, baby formula in Haiti was exorbitantly expensive: a three-day supply cost a full day’s income. Eventually, Fedia found Action Against Hunger’s baby tents for orphans, where she could take her nephew and pick up formula, meet other families in similar situations, and learn about childhood development, healthy nutrition, and good hygiene practices.

In the months following the earthquake, Fedia believed her family had been relatively lucky and she was happy to see Deverly growing up strong. Though her household had access to some basic supplies, Fedia knew that recovery would be a difficult road ahead:

" It will take a long time until things get better. We need schools, health centers, and economic development."

“My brother and I would like to work and help provide for the family, but we need more than emergency assistance: we need schools, health centers, and economic development. By earning an income we’ll be able to take like into our own hands and provide a better future for our children“. A decade later, the rubble is long gone. But, sadly, Fedia’s words are still the reality for too many Haitians.

The earthquake exposed deep weaknesses within Haiti – and it also revealed major flaws and failures within the global humanitarian and international aid systems. While generous, in the rush to provide lifesaving assistance, many international donors and organizations did not sufficiently include local people or institutions in their program planning or implementation, losing out on crucial local knowledge and expertise. The island is a complex and difficult place to operate, and smaller disasters, including drought and hurricanes, further set back progress.

Today, 3.67 million people in Haiti are experiencing a serious hunger crisis due to political volatility, economic struggles, and recurrent natural and man-made disasters – a figure that is only expected to grow in the coming months as access to basic services is hampered by unrest.

“Haiti’s fragile economy has prevented vulnerable households from recovering their livelihoods since the earthquake, despite the financial contributions made by international donors and the Haitian diaspora,” says Piriou. “Haiti must reinvent its economic model, but instability, lack of basic infrastructure, and massive structural challenges limit opportunities for its people.”

"AT EVERY LEVEL, WE EMPOWER LOCAL ACTORS AND REINFORCE LOCALLY-LED CHANGE."

That’s why, after the initial years of emergency response to the earthquake, Action Against Hunger and many organizations in Haiti shifted to a long-term approach to recovery and development, tackling structural issues and strengthening the resiliency and economic capacity of Haitian communities. We launched programs in the Artibonite and North-West regions to provide social protection and structural support to families. We promote local agriculture, provide fresh food vouchers, constructed a drinking water network, and partnered with local institutions to reduce food insecurity and prevent child malnutrition. Our staff – 98% of whom are Haitian – also continue to prepare for and respond to emergencies, such as the cholera epidemic and Hurricane Irma in 2017. 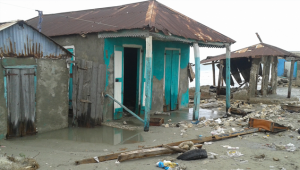 “What gives me hope is the people of Haiti- our staff, the commuities we partner with. At every level we empower local actors and reinforce locally-led change. It’s why we strive for the highest ethical and programmatic standards, so that everyone who works here and everyone we work with is proud of what we do and how we do it. That is how we play a role in building a brighter future for Haiti.”, says Cédric Piriou.

10 years of emergency in Haiti