A brighter future for goodluck

Just before his first birthday, 11-month-old Goodluck started getting sick – he had diarrhea and lost his appetite, and vomited the little food he managed to eat. His mother, 22-year-old Mariam, didn’t know what was making her son sick or how to help him.

She tried at-home remedies and fed him porridge, hoping he would get better – but for a few months, nothing changed.

“I did my best, but it wasn’t enough,” says the single mother.

Mariam took him to a nearby health post and was given painkillers. Still, Goodluck’s health did not improve. Seeing his condition deteriorate, Mariam took her son to the Mpwapwa District Hospital, a 90-minute bus ride away from their home in the village of Msagali, Tanzania.

At the hospital, where Action Against Hunger runs a specialized nutrition center supported by Comic Relief USA, Goodluck was diagnosed with acute malnutrition and immediately admitted for treatment.

“I was shocked, but glad because I knew they would take care of my son – I had to be strong for him,” says Mariam.

Goodluck and Mariam stayed at the hospital, and every day, he was treated with a medical milk formula to help him regain his health. At first, just the smell of the treatment made him vomit, but Mariam followed the advice of hospital staff and persisted. After 12 days, Goodluck had recovered enough strength to return home.

“I was happy to see my son’s appetite improve, and he was no longer weak. They took good care of my son.”

Mariam has four older siblings who have helped her during this difficult time, providing money for food and transportation to the hospital. When mother and child were discharged, Mariam’s brother escorted them to the bus station.

Back at home, Mariam practices what she learned at the hospital. She prepares nutritious meals for Goodluck, primarily fortified porridge with an egg or peanuts. Kenneth, a community health worker, comes by every week to check his progress.

Goodluck is learning to walk and likes playing peek-a-boo with his cousins. A quiet and cautious boy, he loves listening to music. And each day, he gets a little better.

“Before, he wasn’t feeding well. Now, he drinks cow milk very well and plays with his cousins. He is strong enough to take a few steps,” says Mariam. 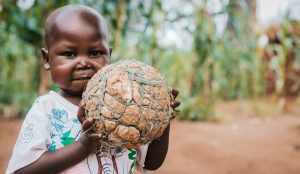 Mariam’s mother, Salma, has been helping take care of her grandchild as he recovers. When Mariam goes to the farm, where the family grows maize, peanuts, and vegetables, Salma watches over Goodluck at home. Last year, the farm’s harvest was poor – they hope this year’s will be better.

Two weeks after they were discharged, Mariam and Goodluck returned to the hospital for a follow up appointment.

"My son has gained some weight and, unlike before, he is playful and happy."

Mariam will continue to visit her local health post every week to monitor Goodluck’s recovery and to attend health and nutrition sessions, where she learns about what to feed her child, how good hygiene helps prevent disease, and more.