Hunger doesn’t stop for a pandemic – and neither do we.

Rehema has fought hard for her grandson – for all six of the children under her care. Four years ago, her daughter, Furaha, gave birth to a son, Rodrick. Soon after, she and her husband separated. Furaha was forced to leave her three-month-old child with his father and his family did not allow her to visit.

In her daughter’s place, an increasingly concerned Rehema visited often. She saw that Rodrick’s health was not good.

"There were days I would visit and he would just cry all day, it broke my heart."

Finally, Rehema persuaded the father to let her take her grandson. Rodrick moved to her home, where she cares for three of her children and two other grandchildren.

Rehema worries often about providing for her large family. Last year was a difficult one: rains and harvests failed. Rehema and her husband, Jacob, work on neighboring farms, where they often earn less than $1.25 for three days of farming. They use this money to buy necessities like flour, oil, and soap.

A few months after he moved in with his grandparents, Rodrick was sick frequently, with a protruding stomach and swollen cheeks. Rehema fed him porridge and hoped he would get better, but the swelling extended to his feet and hands.

At a nearby clinic, health workers measured Rodrick’s arm for malnutrition and the measuring tape indicated he was healthy – but they saw he was weak, feverish, and pale, and knew something was wrong. After trying different remedies, the health staff referred Rodrick to the District Hospital, where Action Against Hunger operates a specialized nutrition treatment center with support from Comic Relief USA.

Travel to the hospital was not easy: the grandparents departed at 4am and walked the whole way, taking turns carrying Rodrick. Rehema put him on her back and Jacob carried him through rivers and tough terrain.

Nine hours later, Rodrick was admitted to the hospital and diagnosed with a serious form of malnutrition: edema, a condition that results in swelling and lethargy. 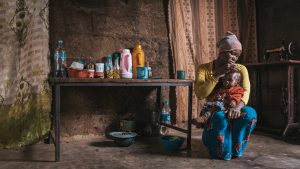 A BRIGHTER FUTURE FOR GOODLUCK

Quickly, Action Against Hunger’s team stabilized the boy and put him on a treatment regimen. Rodrick was an easy patient: he loved the milk formula and got excited when he saw nurses preparing it. After a week, Rodrick felt better – the swelling went down, his appetite returned, and he was active again. He was discharged, and they returned home.

“I am happy Rodrick’s health has improved,” Rehema says. “I’m grateful he is doing well, he is walking. He used to say, ‘I’m tired’ but he is no longer tired. When you would tell him to carry something, he would say ‘I don’t have the strength’ – now he is much better.”

At the hospital, Rehema learned about nutrition and hygiene, including how to cook vegetables, boil drinking water, and feed children with local foods, and she has put these lessons into practice at home. She still worries about how to feed her large family, but she finds comfort in Rodrick’s improving health.

Action Against Hunger, with support from Red Nose Day and Comic Relief USA, is implementing a two-year project (2020-2021) to improve maternal and child nutrition for more than 211,000 children and adolescent mothers in four rural districts in Tanzania. We are scaling up proven interventions, including providing micronutrient supplements, treating acute malnutrition in communities and at health centers, and fostering mother-to-mother support groups — laying the foundation for children to achieve their full potential as adults.