Hauwa Hassan – Hope for the aged with cash transfer

Hauwa Hassan became displaced at the wake of the crises in Northeast Nigeria 10 years ago after the very first attack on Gambora Ngala LGA, Borno state. She moved to Maiduguri with her six grown up children and they settled in Mustapha Mallambe Community in Maiduguri because the village head offered them a portion of land to make some small thatched houses where they have lived ever since.

Each crease of wrinkle on Mama Hassan’s face seems to reveal a day in the over 70 years she has now lived. Her veil is a yellow large piece of cloth and though it is mostly now thread bare, the beautiful embroidered daisy flowers at the corners still stand as strong as Hassan who in spite of her age requires very little assistance to get around her daily business.

Hauwa settled in with her children and grandchildren in a large household of at least 19 people. She engaged in a petty trade of selling soup condiments around the house. While this could keep her busy, it could not necessarily feed her or cater for her needs so as is expected; her son’s wives had to share a roster where each taking turns have fed Mama Hassan over the years. The two wives carried out this responsibility dutifully. Understandably, though, they could only do it to the best of their ability, which often times meant Mama Hauwa had to make do with what was available many times unable to get three square meals.

She became a beneficiary of the Action Against Hunger cash transfer on the Food for Peace Project, which meant with her card, every month; she receives cash transfer of NGN9000- an equivalent of USD25 and receives the same worth in food items which makes a total of USD50.  “When I receive the food items, I share it equally between my sons’ wives but I keep the money to buy other little things in my room that I can eat when I get hungry”. 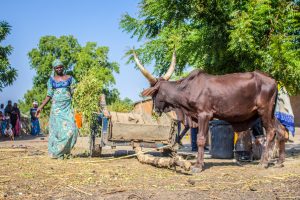 The Food for Peace Project funded by the United States Government targets the most vulnerable populations in North East Nigeria. The project targets the elderly, people living with disabilities and pregnant and lactating women and currently has over 32,000 beneficiaries in Borno, Nigeria.

The card has lifted the burden of her children having to take care of her in addition to their families. She is able to support herself and contribute a quota to the family too to ease the process. She also invests her money in her petty trade of selling soup condiments such as pepper, tomatoes, ginger, crayfish etc. in the house to keep her busy and to raise some extra little cash.

Reaching the most vulnerable in Katarko Ward, Gujba, Yobe State

Katarko Ward, Nigeria Posted on  6 May 2020
Read more
All the news
fr en Press room Our delegations in France Contact us FAQ