Hafsa’s struggle to care for her son

Hafsa is a twenty-five year old mother of three. She lives with her family in a camp for internally displaced people in Mogadishu, SOMALIA’s capital.

When Hafsa had her first two children, she would stay at home with them to take care of them. However, when she gave birth to her third child Mohamed, things changed for her as her husband could no longer provide for the family. Hafsa had to make the difficult decision to leave her children at home every day while she went to work to provide for them.

“I used to be a stay at home mum,” explains Hafsa. “I took care of my children to the best of my ability. With Mohamed, it has been different and difficult.”

“I could no longer depend on my husband who was inconsistent with meeting our household needs,” she continues. “I had to go out and fend for the children.” 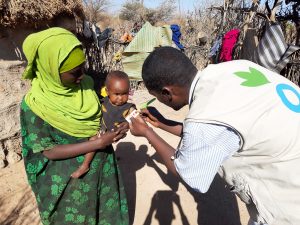 Mohamed on his arrival at the health center.

Mohamed on his arrival at the health center.

While Hafsa was working, Mohamed’s cousin looked after him.

“I would leave Mohamed in the company of his fourteen-year-old cousin to watch him until I was back,” she says.

Some days, Hafsa would return home late and tired, and would prepare a quick meal for her children. She was going to work every day and didn’t spend much time with Mohamed. She didn’t have time to feed him properly.

One evening, while Hafsa was preparing food for her children, she noticed that Mohamed was not feeding well and kept crying. Hafsa assumed he had a fever and gave him some pain relief syrup. Three days later while bathing him, Hafsa noticed swelling in his feet.

“He kept crying through the night and had a high fever,” says Hafsa. “I began to worry because my baby was sick and it was getting worse by the day.”

The next morning, Hafsa visited a nearby Action Against Hunger health centre. After nurses carried out some tests on Mohamed, they confirmed that he needed urgent medical attention because of the swelling in his feet.  Our teams immediately drove Hafsa and Mohamed to our stabilisation centre in Mogadishu.

Mohamed at the beginning of the second week of treatment.

“I was in shock the whole time,” says Hafsa. “I held my son close to my chest. I was hurt as a mother to see my child in pain. He was silent the whole time. Not a word nor a smile. As a mother I felt like I failed him.” 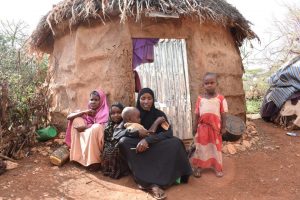 WHAT $60 A MONTH CAN PROVIDE FOR FAMILIES

At the stabilisation centre, a nutrition expert closely monitored Mohamed – checking on him on an hourly basis and ensuring that he was fed properly. Mohamed also received medicine and therapeutic milk throughout his stay.

Luckily, Hafsa brought Mohamed to the health centre before his condition became critical. He responded well to his treatment and was discharged from the stabilisation centre after ten days.

“Mohamed recovered as per the expected standard,” explains Doctor Mustaf, who works at the stabilisation centre. “In extreme scenarios, some children may take up to 21 days of treatment and medication. This is a result of the child being brought in to the centre when they are almost at the brink of death,” he continues.

On his last day at the stabilisation centre, Mohamed was given a pack of ready-to-use therapeutic food (RUTF) to determine if he could continue to the next stage of treatment. This appetite test shows whether a child is ready to start eating RUTF.

When Mohamed was given his first pack of RUTF, he quickly took a bite with the help of his mother. Hafsa was relieved to see her son’s progress.

“I am so happy to see him smile and be happy again. I didn’t think that he would recover this fast considering how bad his swellings were. I am so grateful to see him walk around the centre playing with other children.”

During his first few days at home, Mohamed started having diarrhoea. Hafsa immediately contacted the Action Against Hunger community health worker assigned to Mohamed’s case, who then visited them at home. He pointed out that the cause of diarrhoea could be a result of poor hygiene practices at home.

The community health worker advised Hafsa to wash her hands before feeding her son RUTF, and taught her other hygiene practices like keeping jerrycans, used to store drinking water, clean at all times.

Hafsa followed the community health worker’s advice and started to see Mohamed improve within a few days. He stopped having diarrhoea and went back to normal by the end of that week. “I ensured that he took his RUTF on a daily basis without fail,” Hafsa explains.

Despite feeding Mohamed RUTF for a week after leaving the stabilisation centre, the nurse who weighed him at an outpatient centre noticed that his weight had remained the same. Hafsa was advised to continue giving Mohamed his RUTF.

Mohamed in the second week of treatment.

Mohamed at home with his sister and his mother.

Hafsa was still struggling between going to work and taking care of Mohamed who was now  recovering.

"It’s hard for me to balance between staying at home with my sick child and going out every morning to look for some work."

“I got in touch with my mother and she promised to visit us,” she continues. “My mother will be of great help as she is very good with her grandson. I will be able to go to work without worrying about Mohamed because I know I have left him in able hands,” she says.

Throughout the next few weeks, Mohamed showed signs of full recovery. He’s now playing a lot with his brother, eating well and doing everything like he used to before he became sick.

“I am grateful to all those who were involved with his process of recovery. For the constant support and encouragement I received from the doctors, nurses and community health workers at both facilities. I am happy that my child is happy and healthy and I will make sure to do the best I can to continue keeping him healthy.”