A few months before COVID-19 grounded most of the economic activities in Kenya, communities in the arid areas of the country were worried about another virus: Lumpy Skin Disease.

The disease killed as many as 8,000 cattle in West Pokot County, where livestock are the primary sources of income and food for many families.

Farmers were heartbroken, and many were shaken by the sudden loss of income. Some men, devastated by what they lost, left their homes for a time to mourn.

One farmer named Solomon Chepkobol, who lost five bulls to Lumpy Skin Disease, costing him about $3,000.

In addition to the spread of Lumpy Skin Disease, West Pokot has recently seen outbreaks of two other livestock diseases, Foot and Mouth Disease and Black Quarter, which affects sheep and cattle. Frequent flooding in West Pokot and other regions also puts livestock at greater risk for infectious diseases and poor health. With few veterinarians in the expansive county, many farmers have had to devise their own means of surviving.

“We had never seen something like this,” said one farmer. “We often treat the cows ourselves and only call the veterinary officers when the cow does not get better.”

The cattle did not recover from the virus on their own: the animals stopped eating, hideous wounds broke on their hides, and many died. Families, especially those with young children, suffered when, suddenly, there was no milk to drink. 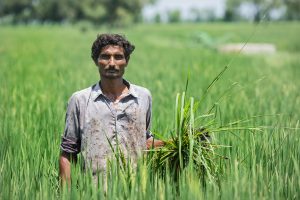 With support and supplies from our partners, Action Against Hunger helped to vaccinate hundreds of thousands of caws and supported animal health workers in the area, even as our teams continued to support vulnerable communities affected by climate shocks including floods and drought. Our teams also supported and facilitated educational visits to the communities by veterinarians, where they taught farmers new techniques to nurse the cows back to health and to prevent the spread of disease.

Dr. James Merisya, Director of Veterinary Services for West Pokot County, and his team helped to vaccinate more than 100,000 cows with support from Action Against Hunger, the UN’s Food and Agriculture Association (FAO), and USAID’s Office of American Foreign Disaster Assistance (OFDA).

According to Dr. Merisya, Action Against Hunger’s intervention was a “saving grace, a very bright light in a tunnel that was very dark” because the county did not have enough money to procure vaccines or pay for community visits. “A ‘thank you’ is not enough to people who have helped us serve our people when we were overwhelmed as a county.”

“If it were not for the people from Action Against Hunger, FAO, and the county, I would have lost my entire herd. They vaccinated and treated my cows,” says Solomon. “I am praying for them, to live long and never be poor.”

witnesses to the climate crisis