Fighting for equal rights and against hunger

Women are too often the first ones to suffer from hunger, but they are also the first actors of change. We introduce to you the voices, the actions and the fights of these women who fight hunger.

All over the world, gender equality has become more relevant and has taken up more space in the media and political area. This increased visibility is crucial to help change mentalities and give a voice to those who did not have one. This everyday fight concerns us all wherever we are. Each of us can contribute positively by denouncing, breaking clichés and stereotypes and supporting women and men who face injustices. The fight for gender equality is also a fight against hunger. 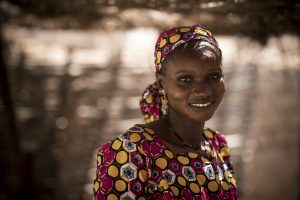 Even today, because of gender inequalities, women do not have the same access to education, studies, training courses or salaries than men. These inequalities are increasingly denounced, debated and fought over. This lack of opportunities and means makes women the first victims of hunger in the world. Kavia, Trésor, Mahajabin and Virginie are among those who, each on their own level, fight hunger and fight for equality.

Beneficiary of Action Against Hunger, Trésor works as a lawyer in N’Djamena for the Chadian Association of Women lawyers. She is in charge of accompanying victims of gender-based violence to help them bring their claims to court. She has a message to pass on to Chadian women: “ Chadian women must wake up, get to work, fight, and above all fight violence against them”.

Mahajabin is a communications manager at Action Against Hunger’s advocacy department in Dhaka. Every day she rides her bike and breaks with gender barriers. In the capital of Bangladesh, it is frowned upon for women to ride a bike.  Rude comments, insults and intimidations, every day Mahajabin faces this type of behaviour but is not discouraged.  She encourages every woman to be as defying as she is, so that the fight for gender equality can move forward.

"A lot of people believe in feminism, equality, equity. They embody hope"

Virginie fights for education in Cameroon. One of the messages she conveys is a message of empowerment. She believes that women must have access to education to fully control their future, to have the same equal income as men, make their own choices and be independent.

All of these women and the numerous testimonies of women who help other women around them to be empowered shows us that they are truly advocates of change. By supporting them, by supporting women we can move forward. This field of expertise lacks the necessary funding. Every donation, even a small one, can contribute to the cause

Much more than food.

Xesar : Fighting for her rights in Iraq