Edo Tshisau lives in Lukalenga, only a few kilometers from Lukelenge hospital. The 40 year-old woman is married and has nine children, with the last one being only 2 months-old.

Her husband, who is a diamond miner in the area has not only been sick for over a month but has also recently lost his job due to the recent flooding. Despite this situation, Edo manages to find some tasks such as working at the local windmill to get some corn or cassava flour to prepare fufu for her family.

A few days after giving birth to her ninth child, Edo’s five year-old daughter Bilomba started feeling sick. Bilomba kept getting thinner and had a fever. She did not get better even when Ebo gave her medicines she had bought for her.

« When my daughter continued losing weight, I decided to go to the Franciscan Hospital in Lukalenga since the nuns distributed soya-based porridge to children. It was unsuccessful, my daughter did not get better ».

Democratic Republic of Congo
The mission

On May 6th, Bilomba was admitted to the Wadi Wa Loba health center, thanks to Maman Lucie [Action Against Hunger case manager] whom I encountered at the hospital. Bilomba was first diagnosed with severe acute malnutrition, then started receiving treatment and one week later was transferred to the stabilization center in Lukelenge because she still had fever in addition to difficulties eating.

After only one week under this 24-hour care, Bilomba did not have any fever and could eat the plumpynut by herself.

“I am happy to see my family again. Thank you Action Against Hunger”.

"I am happy to see my Bilomba becoming healthier and to go back to Wadi Wa Loba health center for follow-up treatment, all this without paying."

The Kasaï Oriental province in the Democratic Republic of the Congo, and specifically the city of Mbuji-Mayi, has its main activities around diamond mining which leaves aside agriculture. Poverty levels go beyond national estimations and are highly linked to the diamond economy. Less than 1 out of 10 children under the age of two reach an appropriate diversity diet.

In addition, citizens in Lukelenge health zone have difficulty accessing potable water, which is not even available in all the villages.

In February 2021, Action Against Hunger conducted a SMART survey in Lukelenge health zone which determined that 20% of children under the age of five were suffering from acute malnutrition, with 5% of them suffering from its severe form. Despite its urban setting, half of the children are not vaccinated against measles, 65% have not been dewormed in the last months and half did not received vitamin A supplementation. 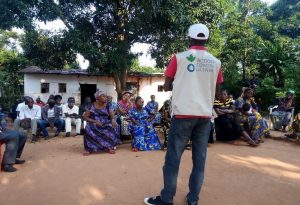 Democratic Republic du Congo : The satisfaction of a mother-to-be.

Action Against Hunger has been present in DRC since 1997 and implements emergency and development programs. While aiming at reducing morbidity and mortality due to acute malnutrition, Action Against Hunger promotes nutritional security among the most vulnerable populations, particularly children under the age of five as well as pregnant and lactating women. Action Against Hunger believes in an integrated approach, articulated around the conceptual framework of malnutrition, and intervenes in nutrition-health, food security and livelihoods, water, sanitation and hygiene promotion, mental health and care practices, gender and protection, and advocacy.

In 2021, Action Against Hunger is present across the DRC through operational bases in Bunia and Mambassa (Ituri province), Goma and Mweso (North Kivu province), Tshikapa (Kasaï province), Mbuji Mayi (Kasaï Oriental province) – its emergency base implementing this Program is located in Kinshasa as well as is coordination office.

Action Against Hunger has been implementing the Emergency Nutrition Programme in DRC (PUNC) since 2008. Between 2018 and 2021 only, more than 60,000 children were treated for malnutrition and had access to better WASH conditions. In December 2020, Action Agaisnt Hunger started the Programme d’Urgence Nutritionnelle par Coalition Humanitaire (PUNCH) in consortium with three other organizations. For the first time, this program integrates the management of children illnesses in line with the integrated health/nutrition approach adopted by Action Against Hunger.

Action Against Hunger capitalized all the information and experience collected in the last 12 years to better respond to population needs. Currently, the emergency component of this program not only includes malnutrition treatment, WASH infrastructures and Infant and Young Child Feeding (IYCF) knowledge, but also free access to primary health care services for all children under five. This component will therefore give children of forgotten nutritional crises a chance to stay in good health.

In Afghanistan, people must not be left behind