In the province of Basra, in Southern Iraq, Action contre la Faim is assisting vulnerable farmers with its new food security programme.

The province of Basra is located near the borders with Iran, Saudi Arabia and Kuwait. In the region’s ancient breadbasket, Mesopotamia, the Tigris and Euphrates rivers come together to form the Shatt al-Arab River, which winds towards the Persian Gulf through cities like Basra. This province, considered the economic heart of Iraq, generates 90% of the nation’s income from oil. However, for decades now, its inhabitants have been suffering from limited access to drinking water, food and livelihoods.

Economic paralysis is affecting almost all aspects of life in Basra, where unemployment is taking hold and affecting a significant proportion of the local population. Small-scale producers, farmers and fishermen are struggling more and more to continue with their activities, due to the critical state of irrigation channels, water shortages and power cuts, caused by the local and national authorities’ negligence and omnipresent corruption. Meanwhile, the direct impact of climate change on available resources is clear for all to see: there is less precipitation and rising temperatures are causing water to evaporate.

For years, following the construction of new dams in Syria and Turkey – which has reduced the flow in two of the country’s major rivers – the water in the Shatt al-Arab River has been becoming increasingly saline, making it impossible to grow crops in coastal areas and aggravating drinking water access problems for over 70% of inhabitants. Many households therefore have no choice but to resort to practices that could cause waterborne disease epidemics.

A RESPONSE TO MULTIPLE CHALLENGES

Due to the serious consequences of climate change in the Basra Governorate and limited access to essential products, thousands of Iraqis are living in a permanent state of food and health insecurity. To respond to these challenges, Action contre la Faim is launching new activities in southern Iraq, where the populations’ needs are significant. The project, coordinated from the city of Basra with the UN’s World Food Programme (WFP) agency, aims to strengthen farmers’ resilience and food security in rural areas.

Households with little land or no other source of income, homes headed by women or children, and families who have lost their livelihood due to recent conflicts can benefit from the project’s activities. Subsidies for small enterprises include a grant for supporting business initiatives and breathing new life into the local economy. When the existing irrigation channels are cleaned and repaired, better use will be made of existing water sources. In other words, water loss will be reduced and the flow will be improved, so that they reach agricultural land.

To boost agricultural productivity, the Action contre la Faim teams are also preparing to install 50 greenhouses and replace damaged diesel pumps with solar water pumps. Education is an important part of all the programmes being carried out in Iraq. Agroecology training will be provided by Action contre la Faim experts to encourage practices with minimal impact on the environment, including soil management and conservation, water management and conservation, and agroforestry. To improve natural resource management, technical experts will renovate and manage 25 irrigation channels. 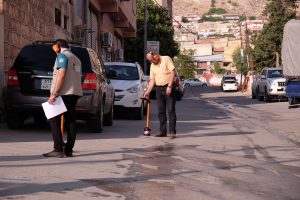 By spring 2021, this programme will have improved living standards and ensured more stable sources of income for 1,240 Iraqi families. Currently, Action contre la Faim is one of few organisations present in the Basra Governorate; for over six years now, humanitarian aid has understandably been concentrated in the regions liberated from the Islamic State group in the centre and north of the country. But behind Basra’s natural wealth and oil production are the urgent needs of millions of inhabitants, left to fend for themselves without any government support. It is vital that we provide assistance and protect vulnerable households today to avoid population displacement in the near future.

In Iraq, the agroecology helps Qassim to work on his own land

Returning and rebuilding life in Sinjar